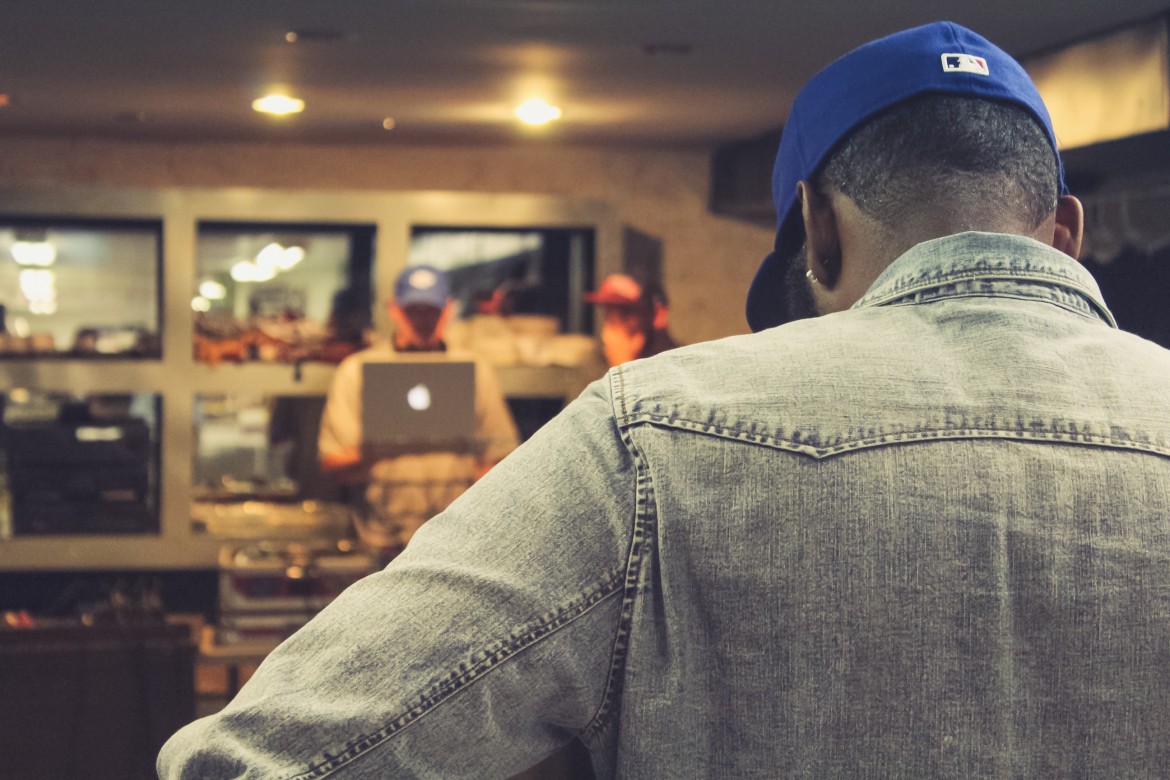 She Said “Play The Race Card” – Oh No

It happened at the Apple Store.  Launch Day for the iPhone: long lines, no lunch, and everything that could go wrong with my order did go wrong.  4 hours later I was still cool until I had to let somebody know what’s what.  When I got home I expressed my anger on Facebook.

My Facebook Post: Y’all think I’m sweet. You don’t even know. Just ask that lady at the Apple Store who said to two black young men near me “if you say one more word, I’m going to call the police.” I had no choice but to insert myself in that situation.

What Happened In The Apple Store

Me:  Picture this: two young men, dressed in polo button downs, nice watches and designer jeans, buying iPhones on launch day with their parent’s money.  The woman was….at the end of the class spectrum, to put it nicely.  I did not have all the facts, but it seems like the woman and the boys had words the whole time they were in line outside. Then the one of the boys said something smart under his breath when the woman passed him in the store.  Yes, he was a privileged little smart-ass, BUT this woman was like 50 years old and these kids were 18 or 19.
All I could see was my son. When she said “if you say one more word, I’m going to call the police” at the top of her lungs, clearly for all around to hear, I calmly reminded her that she was the adult, they were kids and if she thought they were out of hand or felt “threatened” as she said (give me a f**ing break, I guaranteed these kids were seniors at Westminster or Morehouse freshman and couldn’t fight their way out of a paper bag), tell the Apple store manager to deal with them but to call the police on two young BLACK BOYS for saying things she didn’t like, she needs to check that.
And then it got ugly when she said, “how dare you play the race card with me – my husband is a brown man” (standing next to her, he was brown, yes, but not African American). Ya’ll KNOW those were fighting words! “Race Card?!” I said, “Oh, you don’t know me – who do you think you are talking to?” And yup, it was ON and escalating quickly.
Many Apple employees intervened to break us up and she ended up in the corner crying “how dare she call me racist” (which I did not). The boys slinked away to the other side of the room. I got distracted and couldn’t find them again, otherwise I would have given them a talking to – while this woman was crazy and wrong for “calling the police” on these boys and really a bully, their smart asses were going to land in jail. Confronted with the situation, a cop would have taken this low-class woman’s word over theirs – no matter who their daddy was. They really needed to know that. They had no clue, during the whole exchange they looked like two deer in headlights.

Facebook Friend 10:   GOOD. FOR. YOU!! I wish you could have spoken to the boys too, but I’m happy you put her in her rightful place! Threatening to call the police over words from teens. With all the sensitivity happening now, she wanted to escalate some sillyness? Smh…
Facebook Friend 11:   Man oh man. I don’t even know what to say. Ready to call the police? Whats the charge….being black and male? And she said it out loud and has a “brown man?!?” I’m sooooo glad you were there..and not me. Maybe I’m not as calm as I thought because this really disturbs me. It realllllllly does….
Facebook Friend 12:   I guess she doesn’t have any “brown” boys at home. Seriously. Be an adult and tell those boys what’s what. But call the police? That sounds like a death sentence these days.
Facebook Friend 13: Crazy!
Facebook Friend 14:   She knew exactly what calling the police meant and was willing to test her societal privilege by threatening their lives simply because she could. Because calling the police on a black man means that he could die, even if he’s the victim…and more than any other time this is irrefutable! Excellent intervention!!!
Me:   Actually Friend 12, I think she did have kids because she kept saying “they were rude and my kids would have never been rude like that”. I did not deny that – it sounds like the boys were being spoiled brats – but I told her that she should have told someone in the store to get them kicked out the line if they were being that horrible. Really the argument was stupid…something like the boys would not move up in line when they should have. But to still be shouting an hour after the fact AND threaten to call the police in a very loud voice was, like you said, a possible death sentence these days. Married to a “brown” man or not, she knew that was her ace in the hole and she used it.
Facebook Friend 15:   Wow….young black men need to wake up and think about their actions…thank goodness for you.
Me:   Facebook Friend 11, the charge would have been, in her words, harassment. The kid said “oh so now you want to stand by me” when she passed him, so from what I understand, she felt that he was holding up the line outside and he felt that she was not wanting to stand next to him and his friend. I don’t know, whatever, it was stupid – and hardly harassment. And her husband was right there – her life was not in any danger. And she was talking to a KID – seriously, he had braces and pimples. I assume a college freshman because they were out of school, but he could have been in high school. Chastise his little smart ass or get him kicked out of the line, but threatening to call the police was taking it too far. Tension was already high from the long lines. This is how people end up dead.
Facebook Friend 11:   Yeah, it’s beyond sad when people think the first option for any conflict with us is the police. I wonder what’s the real goal…subconsciously…under it all….erase us from America? All of us in jail and only deal with the black folks you tolerate or like? Ugh. I hate it. Let me find some Dave Chapelle specials on youtube or something. I need a laugh right now..a smile. Thanks for sharing the story.
Me:  Facebook Friend 14,  these kids didn’t even think. Unfortunately I am sure they believe that what they see on TV does not apply to them….after all they are not criminals or thugs or drug dealers – or whatever they *think* one needs to be to end up in jail, or worse, dead. Child, don’t nobody care who your parents are or how much money they have. We have learned the questions will be asked after the fact – if at all.
Facebook Friend 14:   That is what is so crazy….calling the police could have been a death sentence….that lady fully understood her threat….it is ashamed we have to be fearful of their very people that are suppose to be there to protect.
Facebook Friend 16:   I hope and pray should my kids ever need it, you are standing nearby to come to their defense. Married to a brown man does not exempt you from being racist….where did she get that from?

Me:   I saw my son in those boys – not that he would have talked to an adult like that, but just a kid who was in a situation that could have taken a turn for the worse really fast. The boys were clearly in over their heads, smart asses – yes, but no threat. If the police was called, I would have been there with them as a witness, I would not have let them go alone. And if that woman doesn’t think that her husband would be profiled at an airport (he was brown like Middle Eastern or Indian) she doesn’t travel much.

Facebook Friend 16:   I know! But it’s sad that our kids cant be kids for fear of a situation turning very bad. What did her husband say during the whole thing?
Me:   Oh he was right there with her, co-signing, but she was clearly the vocal (and most crazy) one. Did I mention that these were grown people? And not small in stature. The kids did not look threatening in the least. Except they were black boys, I guess to some that is threatening enough.
Facebook Friend 17:   Yay. For. You.
Facebook Friend 18:   That is crazy and ridiculous both at the same time-The woman was crazy and her husband was ridiculous. Good for you.
Facebook Friend 19:   These are the lessons we must teach our young men. Even if your kid wouldn’t act like that, you have to warm them about being around and getting caught up with some kids that may. So sad. Some people don’t even have to have such convos with their young men.
Facebook Friend 20:   As you should have.
Me:   Facebook Friend 19, I know what you’re saying but actually I don’t know what that conversation would look like. I mean if the boys were being rude I would tell them to check themselves but what if the woman started it? What if the boys were just defending themselves (if in a smart-assed way)? I wanted to hear their side of the story, but the woman just screamed over everyone.
Facebook Friend 19:  Yeah I understand… Can’t prepare them for things even we can’t imagine happening. Or not knowing both sides. I still find it scary though.
Me:   Yes, agreed, it is scary. And sad and frustrating and stressful.
Facebook Friend 21:   You can never “behave” well enough to appease a bigot – nor should you try. White kids are often super rude to adults (AKA their parents) and to police but it seldom results in their deaths. John Crawford III was walking through Walmart doing what? Yeah. NOTHING! And only now that he is in danger of being sued is the white man who “felt threatened” and called the police recanting his story. That won’t help John Crawford or his family though. Too bad no white person saw fit to check this woman’s abhorrent behavior and the putrid attitude that birthed it. I’m sorry you were placed in the position to have to address her, but I am glad you did. You made a difference today! God bless you for doing that good deed that He planned in advance for you to do. You were on assignment today.
Facebook Friend 22:   I wish you had gotten to speak to those boys afterwards. They need to know just what kind of crisis you may have averted for them.
Facebook Friend 23:   Go Sherrelle!!!!
Me:   If you haven’t seen this before, it’s worth watching. Jon Stewart nailed it.

Although my experience in the Apple Store was upsetting and mildly disruptive with shouting and name-calling, can you imagine how this would have gone down if it had happened the week of the Michael Brown and Eric Garner decisions?