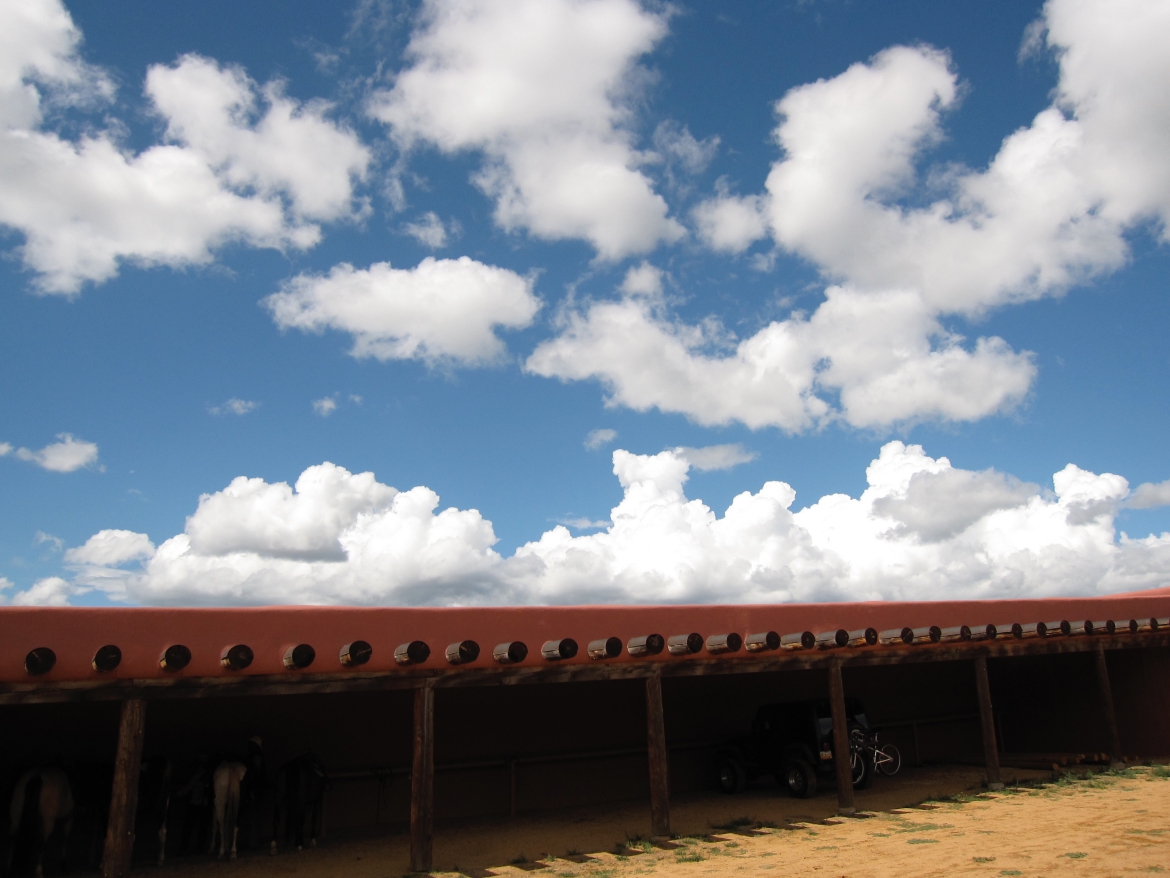 New Mexico was a shock to our senses.  Immediately we noticed the clean, fresh smog-free air.  The weather was sunny and warm, but not humid like in Atlanta.  And the sky….we could see for miles!   We were in New Mexico because we were invited to Jane Fonda’s home, Forked Lightning Ranch.

Leaving the airport we noticed the architecture and we were surprised to see familiar stores as adobe buildings.  We screamed out the window and pointed: “adobe McDonald’s, adobe IHOP, adobe Starbucks, adobe Target!”  Once we left the commercial area, all we saw was desert – which we expected – but as it gave way to tress and mountains the higher in elevation we climbed, that was less expected.   All of it was beautiful and so different from the canopy of trees that makes up Atlanta’s landscape.   After a lovely drive we arrived at the ranch.

The house is amazingly beautiful. Built in a traditional adobe style, it is very spacious with soaring ceilings and an open floor plan.  Rustic wood beams and doors, brick floors, and traditional New Mexican features like silver and inlaid wood make the house a spectacular showpiece, but it is also warm and inviting.  All the furnishings are beautiful, but completely comfortable.  Everything about the house is wonderful, but my favorite part is the art—it’s everywhere and outstanding.  It was so special being surrounded by such beauty everywhere I turned. Besides Jane, our housemates were her daughter, grandchildren and their father.  And I can’t forget Jane’s constant companion, Tulea.

Everyone in the house ate dinner together every night (delicious meals prepared by Jane’s chef Sandra), but during the day we did whatever we wanted to do.  Jane exercised every morning for over 2 hours (she is in incredible shape) and then spent the rest of the day writing her new book.   The rest of us hung around the house reading, talking, watching movies, playing board games and swimming.  James Taylor found a huge black snake by the pool during his visit; in our bedroom there is a photo of him holding the snake.  I’m so thankful that we did not have the same experience.

When we weren’t at the house we were exploring the absolutely breathtaking 3,000 acres: mountains, canyons, trees, desert and the Pecos River.  Although we hiked arroyos, mesas and caynons, driving an ATV was the preferred method of getting around the property.  Jane’s dog Tulea is never left behind when she’s on the ATV; she has a dog carrier strapped on the front and Tulea seems to love it.

There was plenty of fishing in the river too.  Jane is quite a fisherman herself and has worked hard to make sure that the river is full of trout; consequently all fish that are caught must be released. The one thing I was afraid of, rattlesnakes, didn’t show themselves to us (thank God!), even though we climbed rocks and I knew that they were always nearby, as well as coyotes and bears.  The family tells quite a harrowing story about a bear breaking into Jane’s bedroom a few years ago—while she was in there!  I’m glad he didn’t repeat his performance.   And while we heard the coyotes at night and caught fish, the only other wildlife we saw was a prairie dog on the sidewalk in Santa Fe.

I love horses, so I was happy to have the opportunity to ride one of the 9 horses at the ranch.  I rode Jane’s horse, a beautiful Arabian named Gitan, who was always trying to be the leader of the pack.   On our second day of riding, we rode up to a mesa that provided an incredible view of the valley and river below.

We went into Santa Fe a couple of times and had lunch at Cowgirl BBQ (home of the world famous ice cream potato) and the historic La Fonda Hotel.  We walked around Santa Fe plaza, toured St. Francis Cathedral and shopped a bit.  I was in heaven when I found Overland and their downstairs full of UGG boots.  We had fun trying on cowboy hats and my son bought a really cool leather Indiana Jones-type of hat.  That boy looks good in hats! (He takes after his mother in that respect.)

Another afternoon we went to a local “store” (it was more of an auto shop/ garage /sometimes store—if there was someone there to let you in) recommended by Jane for their custom-made leather and silver items.  It was quite the local flavor, but Jane was correct; we found a beautiful necklace made with beads from the 1800’s.   This was the perfect gift for our friend who had been watching Chili Dawg during our vacation.

Our last day in New Mexico came all too soon.  While we were anxious to get home to see Chili Dawg and prepare for the start of a new school year, we didn’t want to leave New Mexico.  What was first a shock to our senses—the big open sky, low adobe architecture, vast open land and wilderness—quickly became our preferred view.  It’s no wonder that Jane is able to do all that she does with such a wonderful place to go replenish and refresh herself.