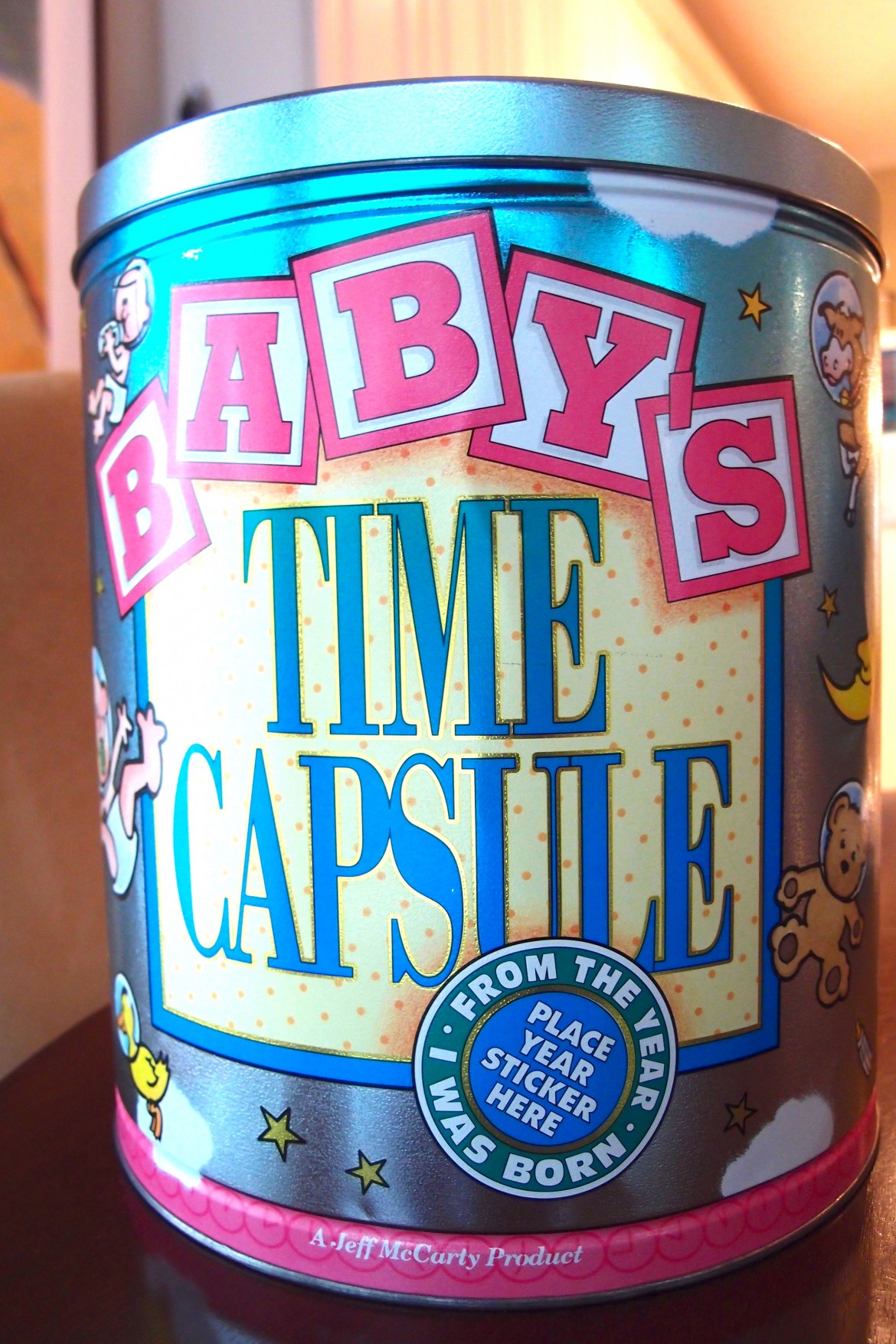 How To Make A Time Capsule

My son just turned 18 (I can’t believe it, I just can’t believe it!). One of the things we did to kick off his birthday weekend was to open the time capsule that I created for him the year that he was born.  I can not tell you how much fun this was for all of us!  He really got a kick out of how much time had changed in 18 years and I really loved the walk down memory lane.

This project was so much fun that I think that anyone who is pregnant now or just had a baby should really do this for your future adult child.   It would make an awesome baby shower gift or activity – each guest can bring something to add to the time capsule.  I bought this time capsule kit over 18 years ago and I’m not sure if this company is still in business, but this is a similar product and the one that I have put away for my daughter.  You can also just buy a can with a lid at The Container Store.

My kit came with a booklet that the parents filled out about current prices of houses, cars, food, etc and our predictions about what those prices would be in the future.  We also gave a snap shot of our life back then: where we worked, where we lived, how we spent our time.    The most fun read was our predictions about future inventions and technological advancements: we were wrong about the flying cars, but right about most other things like “Pocket-size cellular telephones will become a staple item for all Americans – youth and adult” and  “We will be able to buy almost everything on the computer.”   That seems like a “well yeah, duh” moment now, but remember, this was a long time ago!   If you make your own time capsule without a kit, you can write all this information in a notebook.

After filling out the notebook, I gathered items that belonged to that year.   I put each item in a ziploc bag and then put everything in a trash bag before sealing the time capsule.  I wanted to protect the contents from possible moisture and I am happy to say that each item was in pristine condition when we opened it.  I did not store the time capsule in the basement or garage, but in my son’s closet.  We have moved several times in his life, but the time capsule always moved with us and remained in great condition.    When we opened the time capsule, here’s some of what we found:

a newspaper from the day he was born

Both of these men were headliners in 1995.

This is a Best Buy newspaper insert.

I love, love, LOVE that I put these toys in the time capsule!  As the first computer generated movie, Toy Story was a big deal.   Even better is the fact that my son became obsessed with this movie at age 2 when it was released on VHS and that the Toy Story movie franchise is still going strong today!

Here are the other items that we had in the time capsule – don’t worry, I have a handy checklist for you to download below. ☟

I did make one mistake: since I didn’t put a sticker date on the outside like I was supposed to, we opened the time capsule 7 years too early.  According to my original plan, he was supposed to open it at age 25, but I had forgotten and it wasn’t marked.  Actually I think that age 25 is too long to wait to open the time capsule, but I wouldn’t do it before age 16; between ages 18 and 21 are probably the best.

I hope that I have inspired you to create this wonderful keepsake.  It doesn’t take much effort, but it is so special and fun to share together many years later.