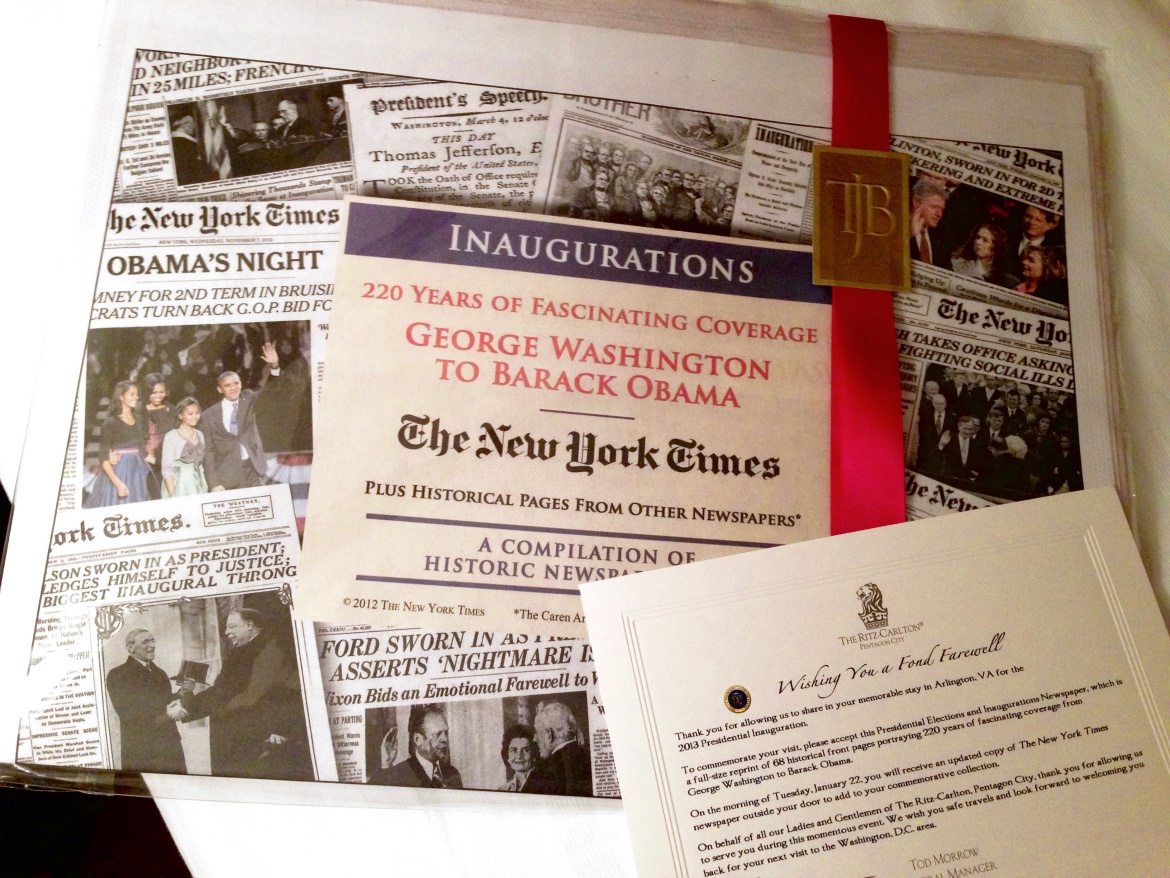 My family traveled to Washington DC last month to see the second inauguration of President Barak Obama and attend a Jack and Jill Inauguration Family Ball.  What a journey – both literally and figuratively!  We drove because my son had a violin audition for college admission in North Carolina.  Would should have been a six hour drive from Atlanta to North Carolina turned into an eight+ hour drive because we encountered a snow storm en route.  After two nights in crummy hotels on the road, we finally made it to DC.  The Ritz Carlton never looked so good.

Once in DC we hit the ground running, trying to make sure that we immersed the kids in a bit of American History.  We saw Lincoln’s suit and hat at the Smithsonian National Museum of American History.  That was pretty wild.  We also saw the American Flag – the one that inspired our national anthem.   It’s pretty battered and torn, but quite awesome to see.   With the anthem playing in the background, seeing the flag was a very patriotic moment.  After the museum we walked the National Mall to the Washington Monument, World World II Memorial, Lincoln Memorial and Dr. Martin Luther King, Jr. Memorial.

The next day was the inauguration.  Although we paid to watch the address inside the Navy Memorial (with heat, food and clean restrooms), we had to wake up very early to go through a security checkpoint.  We stood in this line for over two hours.   My husband does not like cold weather, so he complained the whole time, but all in all it wasn’t a bad experience.    It was actually exciting to be in the crowd.

After the address we walked outside to see the parade.  People had been lined up since early that morning, but thanks to the rouge teenagers in our group, we had a good view from on top of a statue.  They climbed up first and the adults and little kids followed.  Thankfully security was not around . The President and First Lady stopped right in front of us but the other statue poachers got in the way of my camera, damn them!

our crew on inauguration day in front on the parade route

That evening was the Jack and Jill Inauguration Family Ball.  We danced to the best cover band that I have ever heard and ate fantastic food.  There was entertainment for the little kids and a separate party for the teens.  We all looked very presidential in our ball gowns and tuxedoes.

my son with other Jack and Jill teens

The full impact of our weekend in DC didn’t really hit me until I was back in Atlanta and I looked my photos.   During the weekend I was in “mom-mode”, making sure that everyone was fed, bathed, clothed and where they needed to be on time.   But back at home when I had time to reflect, I realized that I had stood at the Lincoln Memorial on the 150th anniversary of the Emancipation Proclamation in the very place that Dr. Martin Luther Jr. gave his “I Have A Dream” speech 50 years ago.   In one 24 hour period I had honored President Lincoln, Dr. Martin Luther King Jr. and the first African American president of the United States.    I am humbled that I was a part of American history.