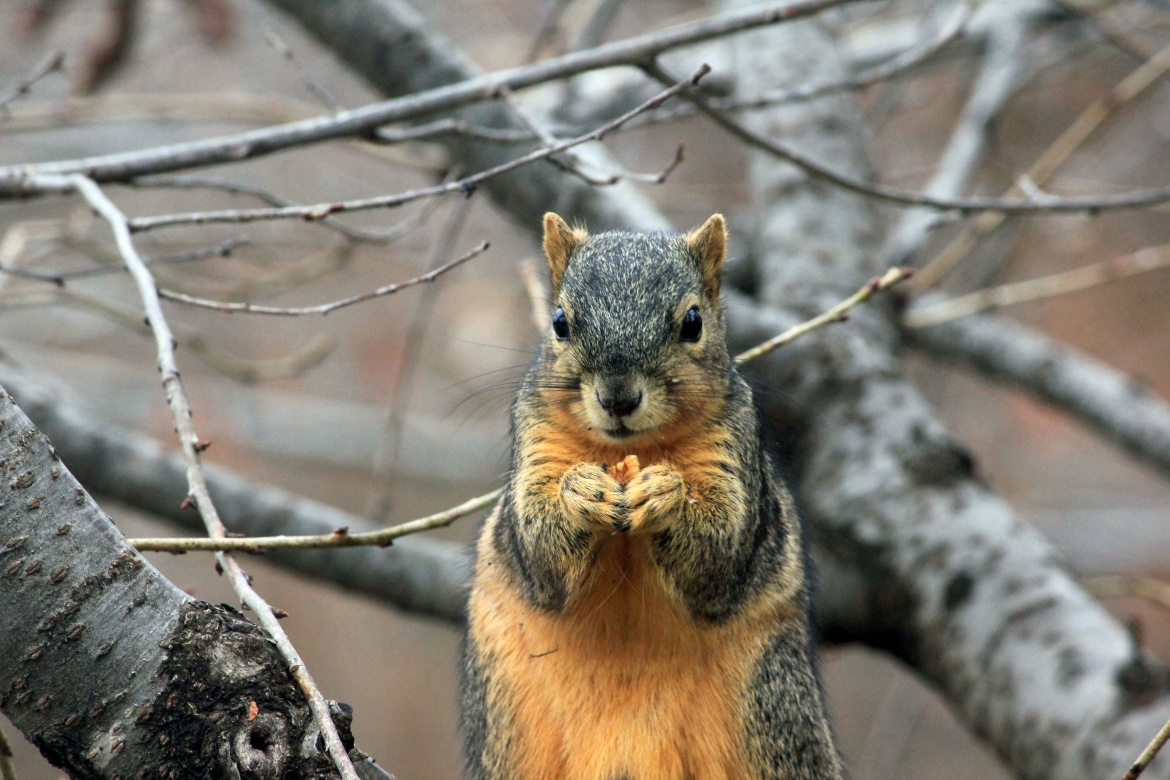 Naked And Holding A Dead Squirrel

I’ve done some gross things in my day.   Being a parent, it comes with the territory.  I’ve cleaned up my share of explosive diarrhea.  One time my son vomited a whole meal’s worth of chili – from the top of a bunk bed.   It took me 2 days to get chili out of the carpet, off the walls and in the cracks and crevices of the bed.  Fun times.

But nothing – NOTHING! – compared to a recent experience that I had with my dog.

I was just getting out of the shower when I heard my husband yelling, “Sherrelle, come quick!”   Thinking something was wrong with one of the kids, I ran downstairs in a towel where I was further summoned outside.  Ditching the towel and throwing on a coat and my slippers, I go outside to see my son standing on the sidewalk holding our puppy, Chili Dawg.  And in his mouth is a dead squirrel.

Let’s stop for a minute and rewind.  Did you notice that my husband called me outside?  To take a dead squirrel out of my dog’s mouth while he watched from the porch?   And this is not the first time that I was asked to handle a dead squirrel.  When my dad removed a dead squirrel from our attic he handed it down to me in a trash bag, because he knows that my husband (who was standing right there) wasn’t going anywhere near it.

I’m not squeamish, but even I have my limits.  A dead squirrel in a trash bag is not the same as one hanging out of my dog’s mouth.  Oh, let me clarify: this wasn’t just a dead squirrel (like from the attic); my dog had picked up squirrel road kill on his walk.   It was about 3/4 of a squirrel – minus the head – with blood and guts spilling out.  Yeah.

I actually tried to find photo online to accompany this story and there were many to choose from.  For some disturbing reason people take photos of squirrel road kill.   But I couldn’t bring myself to use a photo; my stomach turned just looking at the images.  So this photo of a live squirrel is misleading, but dead or alive I don’t believe that I will ever look at a squirrel the same again.

As disgusting as it was – AND IT WAS DISGUSTING – what choice did I have?  My kids couldn’t do it and my husband wasn’t going to do it.  My dog’s health depended upon me removing the squirrel from his mouth – which was not going to be easy, I could tell.  He had a death-grip on that squirrel and no amount of cajoling or bribing him with treats was working, so I put on rubber gloves and pried his mouth open.  To do this I was very close to the dead squirrel and the smell and sight of squirrel guts was overwhelming.  I dry-heaved several times in the process, but finally pried the squirrel out of Chili Dawg’s mouth and threw it on the ground.   I disposed of most of the squirrel pieces before one final heave told me that I had reached my limit.  My husband (watching from the porch) saw that I could go no further and finished picking up the last bit of squirrel guts from the sidewalk.    I spent the next half hour sitting on the porch washing Chili Dawg’s face and brushing his teeth.

Still naked under my coat.

P.S. You may also like to read other stories.

Defeeted: The Story Of A Sock And The Hole That Won

The Old Man And The Pug

My Dog And Me